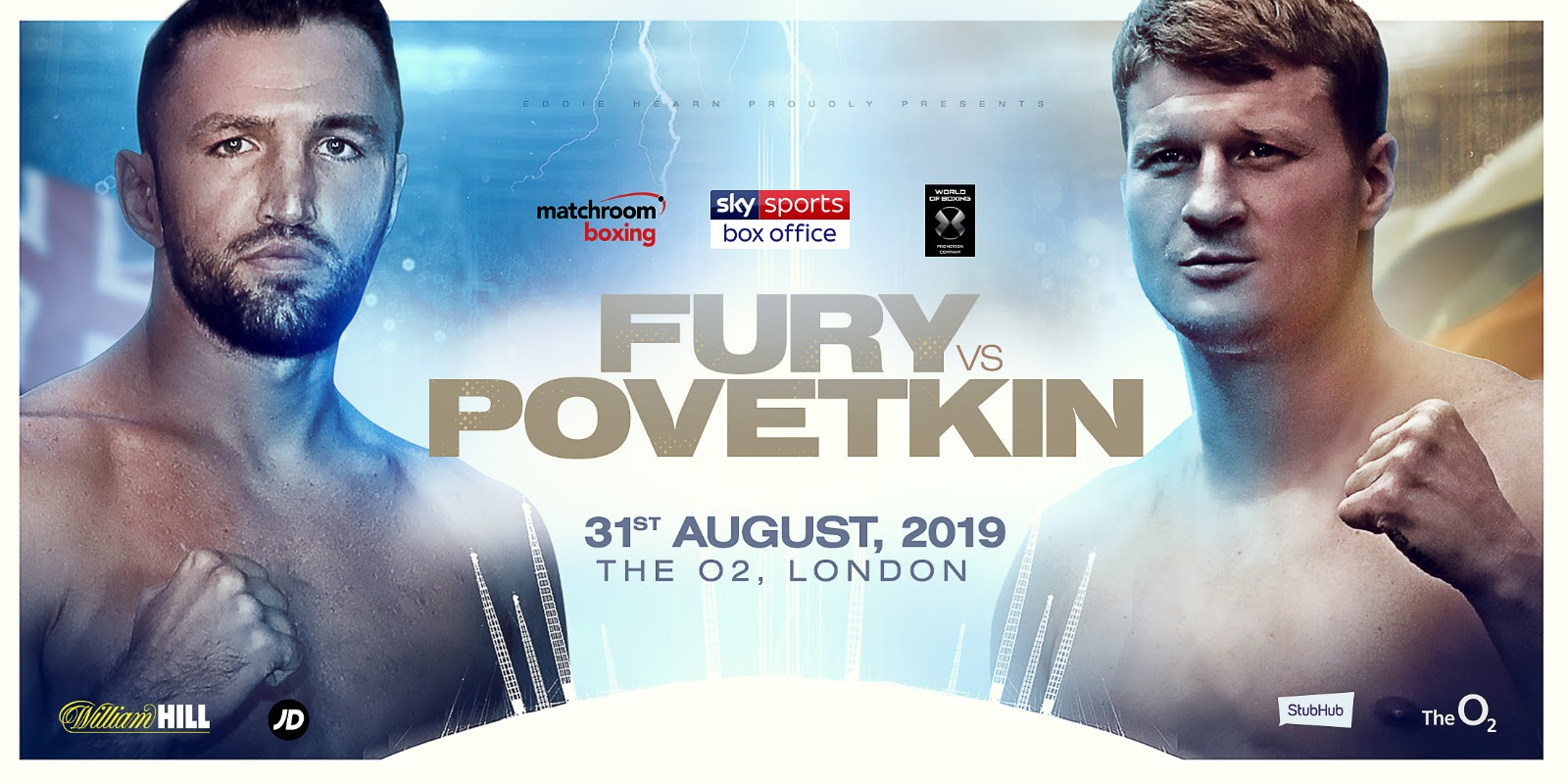 Hughie Fury will take on Alexander Povetkin at The O2 in London on Saturday August 31 on the undercard of the huge Lightweight World title showdown between Vasiliy Lomachenko and Luke Campbell, shown live on Sky Sports Box Office in the UK.

Aged just 24, Manchester’s Fury (23-2, 13 KOs) has been fearless in taking on the World’s Heavyweight contenders, losing a majority 12 round decision in a close and controversial WBO World title challenge to New Zealand’s Joseph Parker in 2017.

Then in October 2018 he travelled to Bulgaria to battle former World title challenger Kubrat Pulev, losing on points in a gallant and gory IBF Final Eliminator in Sofia. He heads into his next challenge coming off the back of two wins over Chris Norrad and Sam Peter earlier this month.

Former WBA World Champion Povetkin, a 2004 Olympic gold medallist, was last seen falling short in his challenge to dethrone former WBA, IBF, WBO and IBO Champion Anthony Joshua at Wembley Stadium in September 2018, succumbing to an onslaught in round seven.

The Russian powerhouse (34-2, 24 KOs) remains one of the most fearsome punchers in the Heavyweight division and is well-known amongst UK fight fans following his devastating knockout of Liverpool’s David Price at the Principality Stadium in March 2018.

“I’m over the moon with this news,” said Fury. “I can’t wait. These are the kind of fights I want to be in. Matchroom can get me these big names and I’m just really looking forward to it. Povetkin is a dangerous man. You can’t take anything away from that. He’s not been where he’s been for nothing. It’s a very serious fight but I’m confident of getting the win on the night.

“This fight here represents a massive opportunity. As soon as it was suggested, I said ‘yes.’ Povetkin is a completely different level to my last fight and I believe his style will compliment mine.”

“Hughie Fury is a young, strong and challenging boxer for me to face,” said Povetkin. “I am glad this fight will take place in the United Kingdom where people really love their boxing. I am anticipating an exciting fight and I look forward to returning to London next month.”

“I can’t quite believe this fight has been made,” said Promoter Eddie Hearn. “It’s happened very quickly and it has to be said Hughie Fury has a big set of balls. There’s huge risk in the fight but there is also huge reward and if Hughie can beat Povetkin on August 31 he catapults himself into huge fights and immediate World title contention. It’s going to be a great fight on a great card – a huge night for British boxing.”

Peter Fury, father and trainer of Hughie, added: “It’s a very big fight for Hughie. He gets big exposure and it’s like anything else. Eddie gave us a list of seven opponents and we said we want the best one – Povetkin.

“He’s gone the rounds umpteen times with top opponents. He’s a gold medallist amateur and a former World Champion. He’s a tough fight for anybody. He’s not ranked up there for nothing. I believe Hughie’s ready now. He’s had 25 fights as a professional and this is his time. He’s achieved a lot for his age already but he’s ready for the top.”

Adam Smith, Head of Sky Sports Boxing, said: “Hughie Fury’s Heavyweight clash against Alexander Povetkin is an exciting first addition to the Vasiliy Lomachenko-Luke Campbell bill, with more thrilling fights to be added to another bumper night of action at The O2.

“We’re delighted to have Hughie Fury on Sky Sports Box Office, having worked with his cousin Tyson in the past, and Alexander Povetkin has always produced fireworks throughout his career. Luke Campbell will then test his razor-sharp skills against the supremely talented Vasiliy Lomachenko in a mouthwatering main event.”

FURY CLASHES WITH POVETKIN AT THE O2