CHISORA AND SZPILKA COLLIDE AT THE O2 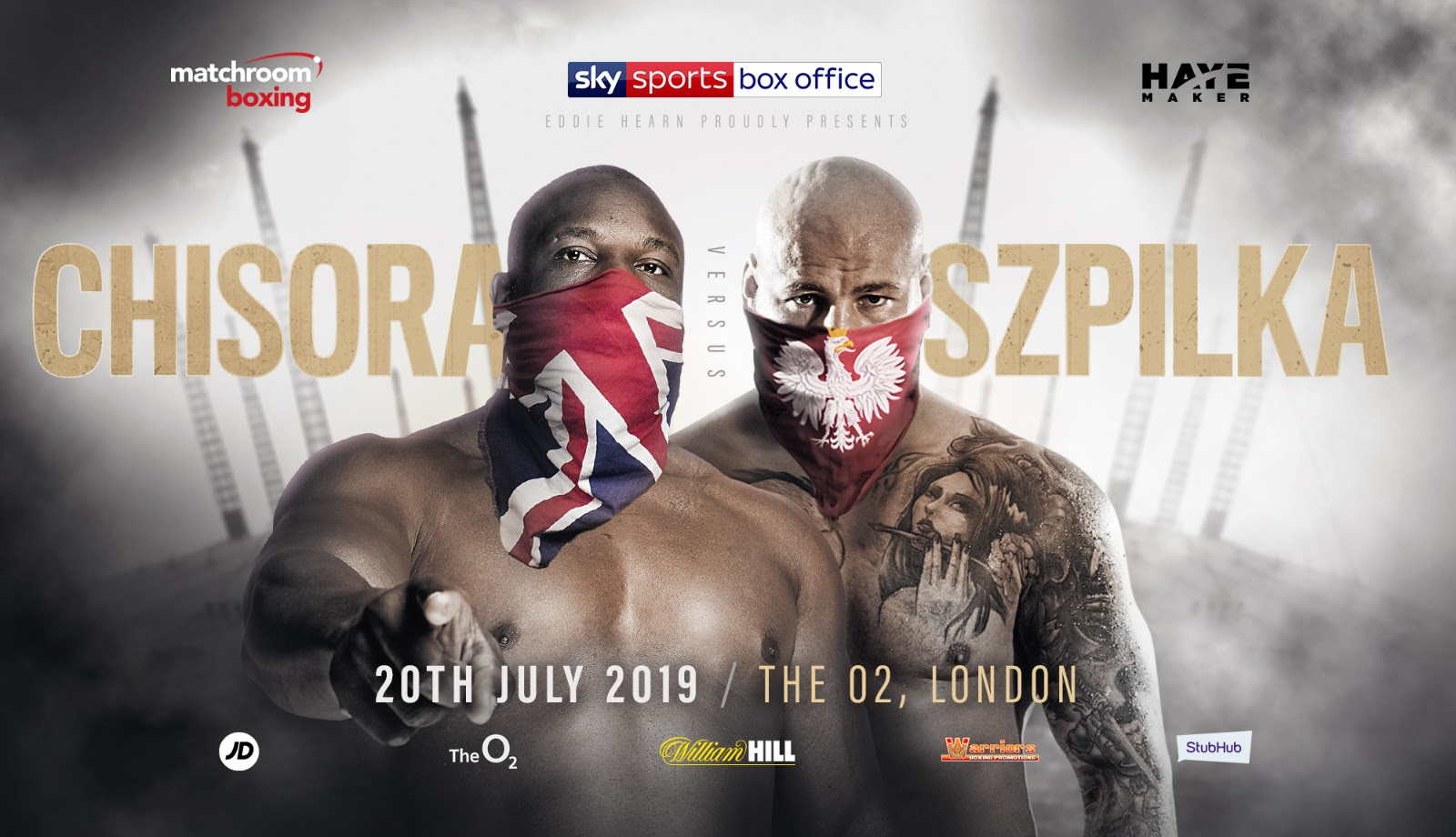 Derek Chisora will clash with former World title challenger Artur Szpilka on a huge night of Heavyweight action at The O2 in London on July 20 that also sees Dillian Whyte take on the undefeated Oscar Rivas for the number one spot in the WBC and Dave Allen collide with David Price in a must-win domestic showdown, shown live on Sky Sports Box Office.

Chisora (30-9, 21 KOs) cruised to a comfortable points win over Senad Gashi at The O2 in April in his first fight with new trainer Dave Coldwell on his big return after he came sensationally close to beating ‘The Body Snatcher’ in their brutal December rematch.

The Finchley man still has a point to prove in the Heavyweight division and has already targeted fights with former WBO ruler and recent Matchroom Boxing USA signing Joseph Parker and undisputed Cruiserweight king Oleksandr Usyk should he come through his Szpilka test next month.

“July 20 is not going to be an easy night in the office, I know that,” said Chisora. “Szpilka is an unpredictable come-forward southpaw, I will need to be in the best physical condition of my career to win this WAR, but I’m ready. Remember, I’m true a fighter, I love the heat of the battlefield, I’m at my most comfortable when most fighters would want to quit. July 20 is going to be explosive, Szpilka won’t be hearing the final bell.”

Szpilka (22-3, 15 KOs), a tricky and awkward 6ft 3.5 southpaw, fell short in his attempt to become Poland’s first Heavyweight World Champion when he challenged for Deontay Wilder’s WBC crown back in January 2016.

Aside from Wilder, Szpilka’s only other career defeats have come to World level opposition in former World title challenger Bryant Jennings in 2014 and unbeaten contender Adam Kownacki in 2017, and the power puncher from Wieliczka is predicting fireworks against ‘WAR’ Chisora.

“I chose this fight because we are both crazy men and it’s going to be a crazy fight!” said Szpilka. “Chisora is a good fighter, he is bull strong and he can box well. He turns up to every fight in great condition, so I know it is going to be a tough night for me. We are both warriors who like to fight, this will be violent.

“I’m relishing the opportunity to fight in front of all my UK fans for the first time in career. I know that there is a proud Polish community in London and I’m sure they will turn out in their numbers to get behind me on July 20 my country’s first Heavyweight World Champion.”

Promoter Eddie Hearn said: “This is a great fight on a huge night of Heavyweight boxing. Both are unpredictable characters but both must win this fight and I believe we will see an England vs. Poland war at The O2 on July 20. Add this fight to the important Whyte vs. Rivas shootout and the big domestic clash between Allen and Price and you’ve got a big night of big men looking to take people out!”

Adam Smith, Head of Sky Sports Boxing said: “It’s terrific to have one of most charismatic Heavyweights Derek Chisora back at The O2 in an unpredictable and exciting fight against the wild Artur Szpilka.

“We were ringside when Szpilka gave Deontay Wilder a real test in Brooklyn and we now welcome him to London. Dillian Whyte topped a cracking event last July – so bring on another Summer Heavyweight Sizzler – live on Sky Sports Box Office a year on.”

CHISORA AND SZPILKA COLLIDE AT THE O2