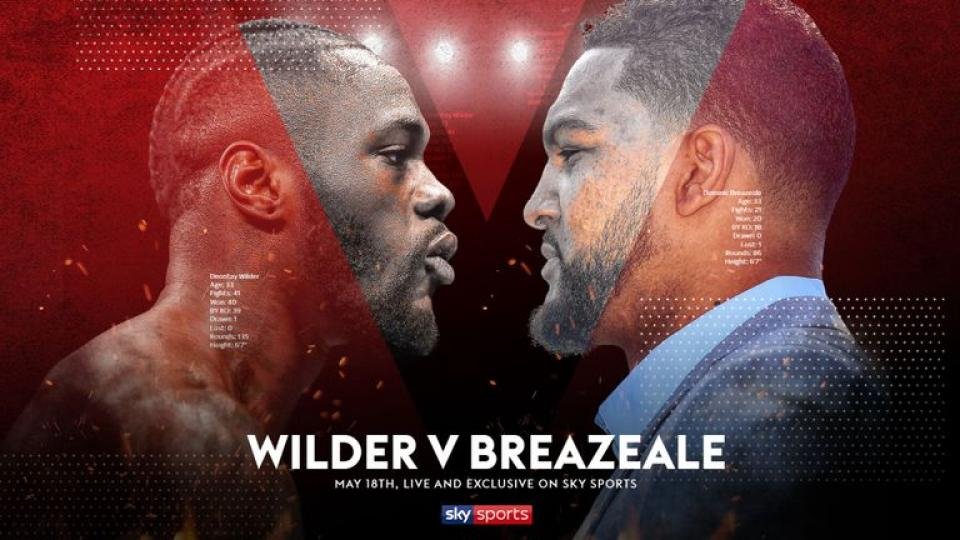 Here we go again. The heavyweight saga continues this weekend with Deontay Wilder taking centre stage. This is Wilders first fight since his draw with Tyson Fury, and it’s an absolute disgrace that’s it’s not a re-match with the Gypsie King.

I’m fully blaming Tyson Fury for that mind you, it seems the money Bob Arum offered was too much to turn down for fights against the Tom Schwarz’s of the world. Eddie Hearn and AJ seem just as happy making money fighting the Andy Ruiz’s of the world, although to be fair the Jarell Miller fight was miles better than Wilder and Fury’s next fight.

Speaking of money, you’re not going to win much here unless you can pick the round, or block of rounds, that Wilder knocks out Dominic Breazeale. Wilder starts 1/7, Breazeale 5/1. Since being stopped in 7 by Joshua in 2016, Breazeale has won three straight against Izuagbe Ugonoh, Eric Molina, and Carlos Negron. Hardly anything to brag about. His best chance, his only chance, is hitting Wilder clean to rattle him. He does have a good right hand, so it’s a possibility. If your buying into that, Breazeale for a knockout is 8/1. Wilder has been hurt and in trouble in the past, and has always had the “bad chin” label attached to him. However, Breazeale himself hasn’t got a good enough chin to survive here. AJ had him down twice which is nothing to be ashamed of, but he’s also been dropped by Amir Mansour and in the win against Ugonoh. Wilder is the hardest puncher in boxing by a mile. An outright Wilder TKO/KO is a very surprising 2/5. I expected 1/4 or 1/5. As soon he lands clean here the fight should be over. Wilder, for all his flaws, is a finisher when he has you hurt. Only Tyson Fury, who effectively rose from the dead, has survived Wilder after being nailed and dropped. He isn’t the best technical boxer Wilder, hes better than he’s made out to be, but he’s the most powerful. There’s been bad blood in the build up to this one, each man saying they want to kill the other (ridiculous), after an altercation in a hotel lobby after Wilders win over Gerald Washington in 2017. Wilders brother looked to have sucker punched Breazeale in the video of the incident. So this may not last very long. It sometimes takes Wilder a while to land on fighters than don’t just stand there and wait to be clipped. But he’s coming out swinging here surely. AJ took 7 to get Breazeale out of there, but I’m liking Wilder rounds 4-6 at 3/1, and possibly even rounds 1-3 is worth a shot at 11/2 with a couple of quid. This has KO of the year written all over it. The hope is that Wilder, Joshua, and Fury all keep winning so they eventually run out of options (if they haven’t already) and need to fight each other before it’s too late. It sums boxing up even having to say that, but we’ll all watch and pay regardless, while hopefully making some money ourselves along the way!

World Super Series of Boxing Semi-Final live on Sky Sports, where Regis Prograis awaits the winner. IBF World Champion Ivan Baranchyk (19-0, 12 KO’s) and Josh Taylor (14-0, 12 KO’s) meet in Glasgow in what should be a great fight. Taylor is the massive favourite here at 1/7, and the champion Baranchyk 9/2. The good thing about the Super Series is it give us great fights, without the added hassle of promoter squabbles (although Baranchyk was ever so close to pulling out). Baranchyk has Anthony Yigit as the best name on his record (Taylor beat him in the amateurs), who he dished out a hell of beating to win the vacant IBF title in the opening round of this tournament. Yigits left eye was completely shut and ref stopped the fight on doctors’ orders. Viktor Postol is the best name on Taylors record, and he was easily outclassed by Taylor in a brilliant performance last year. Aside from Terence Crawford, Postol was never beaten so thorough and easy. Taylor for me has the most potential out of our current British prospects, so if he wins here to get his first world title,  I think he wins the whole thing. I’m going for Taylor on points, I don’t think it will be a blow out, Branchyk will be there and fighting until the end. I think we get the full 12 rounds here (8/15), with a UD win for Taylor (8/11). Prograis v Taylor in the final will be one of the biggest and best fights of the year (or next) when it happens.

Billy Joe Saunders v Shefat Isufi, Vacant WBO World Super-Middleweight Title, BT Sport – Have to admit, i’ve never heard of Shefat Isufi. A quick look at his record shows me he’s your standard domestic fighter, who shouldn’t pose much threat to Saunders. The odds reflect this Saunders 1/100, Isufi 18/1. This is Saunders first fight at Super-Middleweight, and Billy-Joe is one of the most technically sound boxers in the division, maybe all divisions, so this is a quick fix to get him a world title and get him (hopefully) much bigger fights. Saying that, its been a world title fight one day, an interim the next, back to world title, so I have no idea if it will be a world title fight come Saturday night! He does himself no favours Saunders, failed drugs tests aside, by fighting Charles Adamu etc, after calling out the Golovkins of the world. He would of had a chance against any man at middleweight, but this win will get him back on top and get himself a big fight as a two weight world champion. Isufi has been stopped once, but Saunders isn’t a man known for knock outs. If you fancy a KO for Saunders, you can get around 2/7. I actually fancy an easy boxer masterclass over 12, and a comfortable UD win for Saunders (5/2). The fight to go 12 rounds here is 5/2.

Emmanuel Rodriguez v Naoya Inoue, WBA Super World & IBF World Bantamweight Titles, Sky Sports – World Boxing Super Series Semi Final. Inoue looks unstoppable. “The Monster” is a ferocious puncher. His last 7 fights have lasted 30 rounds out of a scheduled 84, with only Karoon Jarupianlerd lasting past the 6th. His last two, Payano and McDonnell, havnt seen round 2. I think Emmanuel Rodriguez will survive longer than most and be Inoue toughest fight so far, but eventually he will get stopped in the middle rounds. He only scraped by Jason Moloney in the opening fight. Nonito Donaire awaits the winner, and when its confirmed as Inoue, Donaire should run a mile. Inoue KO (1/3). Under 7.5 rounds (5/6)

Gary Russell Jr v Kiko Martinez , WBC World Featherweight Title, Sky Sports – I had to double take when I saw Kiko Martinez was fighting for a World Title in 2019. Gary Russell is far too good to be wasting his time, and prime, on Kiko Martinez. This will (should) be a ridiculously easy win for Russell, more than likely by stoppage. Russell stoppage (2/5).