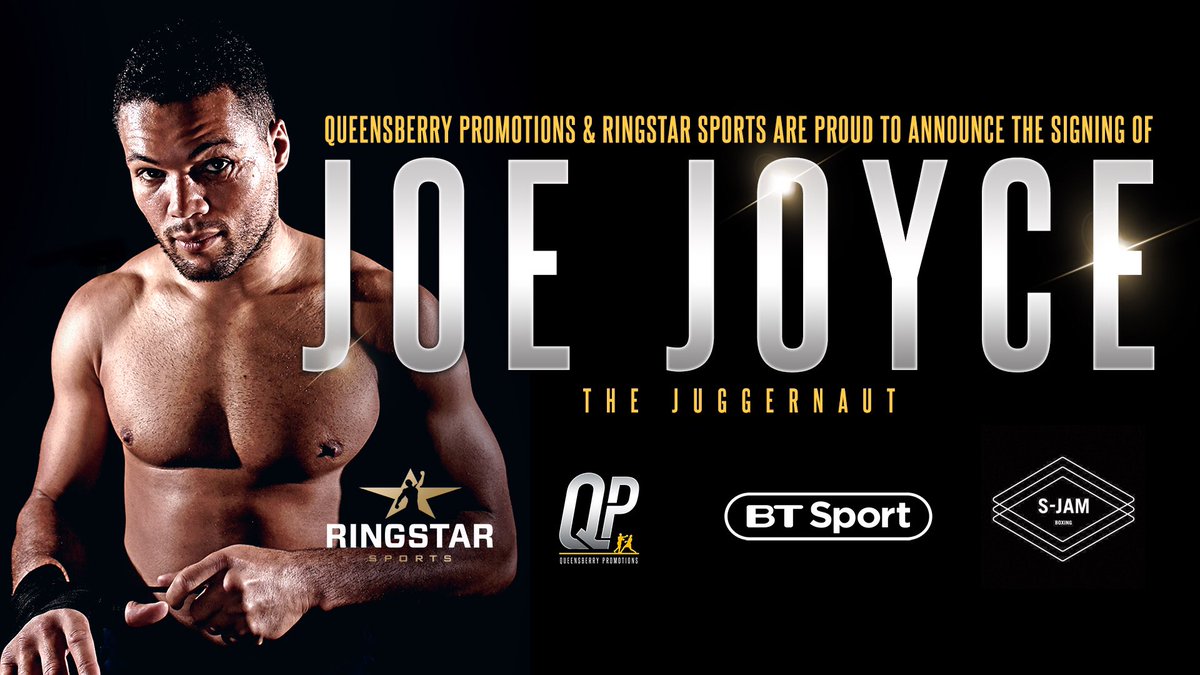 HALL OF FAME promoter Frank Warren is delighted to welcome unbeaten heavyweight and Olympic Silver medallist Joe Joyce to the Queensberry Promotions stable in a co-promotional agreement with Ringstar Sports.

Joyce’s Queensberry Promotions debut will come as chief support to Billy Joe Saunders’ clash with Shefat Isufi on May 18th at the Lamex Stadium, home of Stevenage FC.

The ‘Juggernaut’ turned professional following his silver medal-winning exploits at the 2016 Rio Olympics, where he was considered by many judges to be unfortunate in losing a decision to Tony Yoka in the final.

Joyce’s previous amateur accomplishments include the winning of gold at the 2015 European Games and 2014 Commonwealth Games, while he collected bronze at the 2013 European championships and 2015 World Amateur championships.

His professional journey began under the tutelage of his then promoter David Haye’s coach Ismael Salas before he later transferred to Big Bear in California to work with another Hall of Fame trainer in Abel Sanchez.

Now his focus has returned to the UK, Joyce will be trained by Adam Booth.

The Putney-based heavy hitter put a genuine marker down in the heavyweight division in February with an impressive destruction of former world champion Bermane Stiverne inside six rounds in London, having previously recorded a first-round stoppage of the 23-2 Joe Hanks at the Staples Center in December on the undercard of the Tyson Fury-Deontay Wilder world title showdown.

His statement performances have seen Joyce installed as mandatory challenger for the EBU European title held by Agit Kabayal, while his ranking with the WBA sees him as a likely challenger to the regular champion Manuel Charr.

He has also been mandated by the British Boxing Board of Control to fight for the vacant British heavyweight title against emerging force Daniel Dubois, who is now a Queensberry stablemate.

Not short of options, Joyce himself expressed no particular preference when pressed on a favoured foe.

“It doesn’t matter who it is,” he considered. “Manuel Charr, Agit Kabayal or Daniel Dubois – the Juggernaut ploughs through all!

“I am delighted to be joining up with Frank and the Queensberry team,” added Joyce. “I am now in the right place to accelerate my progress and really make my mark on the UK scene, while continuing to press forward towards world titles.

“Having seen the great job Frank has done with Tyson Fury, I know I’m in the right place. I’m not far away from being in with the top guys in the division and I know Frank is the man to help guide me to becoming a world champion.”

“I am really looking forward to featuring alongside Billy Joe Saunders at Stevenage FC for my Queensberry Promotions debut on May 18th.”

Promoter Frank Warren added: “In my opinion we now have the three best up-and-coming heavyweights in the world on our books, with a host of fantastic fights there to be made.

“I have always rated Joe and I am delighted to finally get the chance to sign him up.

“Joe has impressed in every fight so far in the professional ranks and is only going to get better as he continues to step up the levels.

“With Joe, Daniel Dubois and Nathan Gorman all moving rapidly in the right direction, the fans can look forward to some massive heavyweight nights in the very near future.

I’d also like to extend a special thanks to both S-JAM Boxing and Richard Schaefer of Ringstar Sports for their help in completing this deal. I’ve done a lot of work with Richard over the years and we’ve worked on some great shows together. Along with S-JAM Boxing, they are doing a terrific job with Joe and I’m looking forward to working with them and delivering some big nights.”

Richard Schaefer of Ringstar Sports added: “Ever since turning pro, Joe Joyce has been on a mission. With spectacular performances he has become a top 3 rated Heavyweight and is now zooming in on the ultimate price: The Heavyweight Championship of the World. With Frank Warren and his team, we have now the final piece in place which is a partnership with the UK’s leading platform – BT Sports and the UK’s leading promoter Frank Warren. Joe will continue to thrill fans on both side of the Atlantic, indeed exciting times ahead for fight fans across the world!”

Sam Jones of S-Jam Boxing stated: “I am really excited by the link up with Frank Warren. Joe is in a great position at the moment. He is high in the WBA rankings, a champion with the WBA and mandatory for both Manual Charr and (EBU European champion) Agit Kabayal. He’s also be mandated for British title. There are options on the table and I know Frank will be the man to deliver the big fights. Joe’s ultimate goal is to become the world champion and he will get there whether that’s via Tyson Fury, Anthony Joshua or Deontay Wilder and Frank will be the man to deliver it!”

Tickets for Joe Joyce’s Queensberry Promotions debut as chief support to Billy Joe Saunders v Shefat Isufi on May 18th can be purchased via borotickets.co.uk and are priced as below: