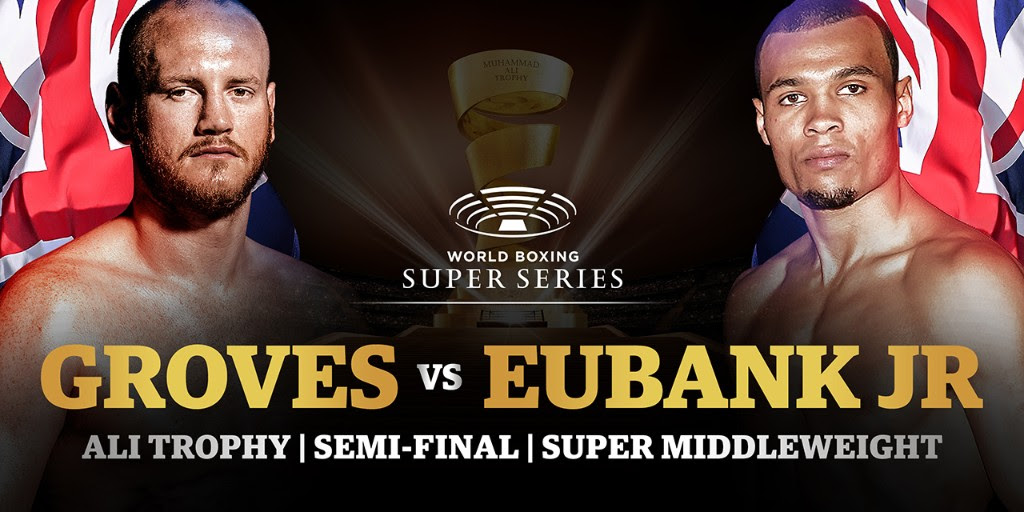 This coming Saturday sees the latest domestic dust up between two British boxers for a World title.  Manchester’s MEN Arena hosts the semi-final of the World Boxing Super Series between George Groves and Chris Eubank Jr.  The latest all-British Super-Middleweight world title clash sees plenty on the line for both men, not least a place in the final of the tournament and substantial bragging rights.

Both men have 20 stoppage victories in their pro careers (both also coincidentally made their debuts against Lithuanian journeyman Kirill Psonko) which indicates they have enough power to warrant respect.  Where as Groves has campaigned entirely at Super-Middleweight, Eubank only moved up to 168 lbs for the World Boxing Super Series tournament.  Even at middleweight, the Brighton boxer rarely demonstrated devastating KO power, preferring (or being more able) to wear his opponents down with relentless pressure and volume.

Ironically, his most chilling one punch knockout came in the higher weight class in his most recent bout.  While the stoppage was undoubtedly spectactular, Yildrim was relatively unproven so it is hard to gauge exactly where Eubank is at in terms of his punch power at 168 lbs (a theme that continues across the other categories).

Groves, on the other hand, is renowned for his powerful backhand and venomous jab.  Much has been made of Martin Murray’s comments, which compared the “Saint” favourably to pound for pound machine Gennady Golovkin.  Other domestic rivals such as Paul Smith and Carl Froch can also testify to his ability to hurt you in an instant with both men visiting the canvas courtesy of Groves.

The pre-Froch version of George Groves seemed to possess one the sharpest jabs in British boxing.  There has been a lot of debate since as to how effective a weapon it has been from then on however.  This writer feels that Groves hasn’t quite had the same confidence since losing at Wembley Stadium, in front of 80,000 people no less, but that doesn’t mean he can’t still be technically effective.  A lot of those who favour Groves to win on Saturday, do so because of his perceived advantage in skills and boxing intelligence.  If Groves does get his ramrod jab landing regularly from the off, this could be a long night ahead for Eubank.

While the perception seems to be that Groves can, and possibly needs to, outbox Eubank to win, I feel this does a certain disservice to the former middleweight.  Eubank is highly unorthodox.  His own jab is non-existent at times.  However, he does possess a high level of boxing ability, just not in the traditional sense.  The younger man has a wide array of punches and it is exactly this sort of variety that he will rely on to unsettle his opponent come Saturday night.  His unpredictability will be enough to keep Groves guessing and keep the WBA champion on his toes.

That said, in terms of pure boxing fundamentals, Groves surely holds the advantage.

One clear winner here and it doesn’t require much discussion.  Groves turned pro three years before Eubank and while they are relatively close in the overall total of pro bouts, the difference in levels is clear to see.

Groves has fought in four world title bouts (losing three) and although Eubank has three of his own (for his IBO trinket) on his record, the contrast between the quality of opposition is vast.  The experience Groves holds from the huge events against Carl Froch would be enough to see him tick this box but he also traveled stateside to take on the underrated Badou Jack.  Even at domestic level, Groves headlined against long-time rival James Degale, which exposed him to the big stage and he will be ready for any potential mind-games from Team Eubank.

With great experience comes more wear and tear (to paraphrase Uncle Ben from Spiderman) and we move into the territory where Eubank should gain confidence.  If he needed any more in that department.  Groves has been stopped twice and it took him a long time, and a new trainer, to get over the mental impact of two such high-profile defeats.  Mentally, he appeared to exorcise any demons when he stopped Chudinov to secure his world title but Groves rarely does things the easy way.

Eubank on the contrary, has rarely been troubled throughout his pro career.  The sole blemish on his record was a points defeat to rival Billy-Joe Saunders and was hardly a war of attrition.  Saunders pot-shotted and out-boxed Eubank for most of the fight before a comeback of sorts saw “Next Gen” come on strong down the stretch.  In short, this defeat wasn’t the type of contest that would leave much long-lasting damage, not physically anyway.  Since then, Eubank has had things all his own way.  Whether that is more through careful matchmaking, or technical improvements is open to interpretation.

What isn’t debatable is the fact that Eubank is by far the fresher of the two.  He has less miles on the clock and comes into this contest on an upward curve.  Just how much Groves has left in the tank will surely be answered against the younger contender.

There have been many questions about Groves stamina and ability to maintain a high pace over twelve rounds.  If there any issues in this area, Eubank really is the wrong opponent to be sharing a ring with.  His engine is fantastic and he has proven he can press the action for the twelve round duration.  However, he has continued to do this with relatively little resistance.  Arthur Abraham is a good name to have on the record but was long past his peek when he challenged for Eubank’s IBO strap.  Even in his prime, ‘King’ Arthur was notorious for taking time off during rounds and boxing in bursts to attract judges’ attention.  In short, perfect matchmaking to showcase Chris Eubank Jr.

If he is able to set the high tempo he wants to, there is no way Groves will keep up.  Whether he is allowed to or not is the key to how this will play out.  George Groves will have to use his a combination of his nous, power and skills to make Eubank think twice about charging in.  Whether Eubank will continue to press after (or if) he feels consistent hard shots is a question that will be answered on Saturday night.

So if this section were only discussing stamina and work-rate, Eubank would win hands down.  However, there are other physical factors that will play a factor in the ring.  Groves holds the cards in terms of height and reach.  He will also be by far the naturally bigger, and heavier, man come fight night.  This could also have an impact on just how aggressive and offensive Eubank is allowed to be.  Will he be able to press relentlessly against a bigger opponent? Will Groves be able to keep him at the end of his reach? And if they do get in close, will the bigger man look to lean and spoil?  So far in his professional career, Eubank has only had to box one way.  His way.  We are likely to find if he can adapt this weekend.

Edge: Even (for different reasons)

So with all that in mind, where will this be won or lost?

If we consider four potential outcomes; Groves stoppage; Groves decision; Eubank stoppage; Eubank points (cue it being a draw), this is a rare sort of contest because any of those outcomes seems as likely as the other.

As mentioned, Groves has the power to hurt anyone in the division.  If he can floor Carl Froch he can definitely hurt Chris Eubank.  Eubank’s chin is untested (like a lot of him) but so far hasn’t shown any obvious weakness.  Regardless of whether it is made of granite or glass, Eubank would be unwise to put it to the test unnecessarily.  He can leave himself flat-footed and is in danger of getting caught heavily, particularly by a hard right hand.  If he is going to emerge victorious, Eubank must avoid being caught cleanly too often, while still managing to disrupt Groves’ rhythm and pile the pressure on him.

Groves can box on the back foot but it is far from his natural instinct and the longer he spends with his back against the ropes, the more joy Eubank will get.  If this pattern is established early on, the harder it will be for Groves to control the tempo and keep his man at bay.  However, while neither man will be intimidated, my prediction is that both men will show mutual respect in the early stages.  Not quite as passive as Eubank-Saunders but not the all-out war many are anticipating.

Both men will want to take the centre of the ring and force the opponent onto the back foot.  The difference being that Groves is capable of doing this from a greater distance, whereas Eubank will need to close the gap to be effective. The slower the pace, the better Groves will perform, and vice-versa.  I think Eubank will get moments of joy but they will be fleeting.  Overall I see Groves tagging him enough to frustrate and, occasionally, hurt him.  Groves’ superiority in skillset, coupled with his power, should see him control the majority of the action and it would be no surprise to see “Next Gen” touch the canvas for the first time in his career.  Normally, if Groves hurts an opponent he is a ruthless finisher but I believe Eubank is well conditioned enough to recover and last the distance.

Verdict: Groves to win on points

Nyambayar vs Pasillas
Matias vs Ananyan